Alumni of this program include:

The Chamber Leadership Program is intended to groom candidates for leadership roles in the community. The Chamber offers assistance and referrals for placement with community boards and organizations.


The purpose of the Association shall be to develop community leadership, to enhance awareness of community concerns, and to facilitate periodic opportunities for continual LTD alumni leadership,socialization, networking and furtherance of the organizational purposes.


- Monthly classes allow class members to explore opportunities for increased participation in city affairs and provide an opportunity to interact with current agents of change within Mesa.


- Graduation is based on attending classes, participating in a class project, shadowing a leader of your choice, attending several non-profit board meetings, performing a ride-along with police, fire, and park representative as well as choosing among and attending tours that meet your interest.

"The Mesa Leadership Training and Development Program
began in 1981 with the belief that every community has potential leaders
who need facts and opportunities to be effectively engaged in their community."

Members have the opportunity to rub shoulders and feel important with people in various government positions.  In return, the students are told how crucial the WaveYard, Earthwise Energy and light rail are to the city.  They are also given the chance to non-profit board hop, network, serve on various boards within the city government or non-profit organizations in an effort to pad their resume. These are "Stepping stones" as they call it, which also allows them the benefit of "name dropping" when they need to appear influential.  This program can potentially catapult them to higher positions within the community where they can do the bidding for those "important" people in government.  After all, discussions could "enhance not only their knowledge of current events impacting their community but the wide-spanning views that government and politicians must weigh in determining community resolutions."

Just think....they want to have a YOUTH Leadership Training and Development group as well.  Might as well get them indoctrinated while they're young.


Those interested must go through an application process.  It is at this stage that many are weaned out simply based on their answers to the questions asked.  Conservatives need not apply.

1.  Describe the community or civic subject that interests you the most.
2.  What would you most like to contribute to the Mesa community?
3.  What do you expect to gain from participation in the Mesa Leadership Training and Development program?

Recent candidates who have been accepted into the program include political activists, a head Community Organizer for ACORN, President of the Police Union, Arizona Humanities Council members, SRP employees, members of the Chamber of Commerce, City of Mesa and City of Phoenix employees.

This isn't surprising especially when you look at those who are on the board of directors.


We've seen the "input" of this Leadership training.  Now let's see the "output".


-Diane and her husband Todd Selleck (class of 2009) along with fellow classmates Wayne Manske and Michael Conway were all board members of LD18 Democrats in 2010.  All were very actively involved in the recall effort against Russell Pearce.

-Wayne Manske along with alumni Ana Cadillo (2007) and Denise Heap (2010) all serve on the Mesa Human Relations Advisory Board which was the committee who reviewed the Utah Compact and approved the Mesa Compact to move forward to the City Council last year.

-The class of 2008 was able to participate in the Mesa Latino Town Hall at MCC sponsored by Mesa Public Schools (Is this really the best use of our tax dollars?), MCC  and the Mesa Association of Hispanic Citizens.  The Mesa LTD has since promoted the Latino Town Hall and encouraged its members to attend.  The goal of the MAHC is to encourage, support and advocate for public policies that address the concerns and needs of the Latino Community in Mesa and the East Valley.

David Luna (class of 2002) is the Director of Educational Television for Mesa Public Schools and and Co-chair for the annual Mesa Latino Town Hall event.  He was also a donor to Jerry Lewis' campaign.  He was recently recognized by the activist organization Valle del Sol for his role in the Hispanic community.  Luna has served on the board of directors for Mesa United Way (with Kirk Adams), United Food Bank, and Mesa Association of Hispanic Citizens.

Members of the Board for the MAHC include:

Personally, this program is not something I would brag about.
If you know of someone who does, well, now you know who their allegiances might be with not to mention that they
wasted $500 and 9 weekends of their lives.

And they probably lean a "little" to the left. 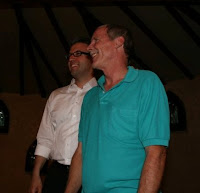