Jason LeVecke is the grandson of Carl Karcher, founder of Carl's Jr. restaurants.  You may have recognized his name from the previously discussed Arizona Marcha website.  Along with Jeff Flake, (who LeVecke donated $4600 to his 2008 campaign) LeVecke was also a speaker at the Arizona Employers for Immigration Reform forum on May 30, 2007.  You can listen to his arguments for supporting amnesty (aka- "comprehensive immigration reform") here.  He encouraged those in attendance to call or email their federal state representatives and tell them "you want comprehensive immigration reform but not with employer sanctions".  He also encouraged them to become supporters of AZEIR. 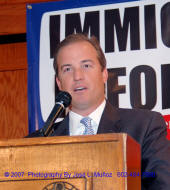 LeVecke is another "Republican" who has testified and fought against the Arizona Employer Sanctions laws.  As the owner of over 150 fast food restaurants, one might guess that not being able to hire illegals at low wages probably affects his bottom line.

He fought against Employer sanctions laws enacted in 2008 as well as against Russell Pearce.

In more ways than one.

1.  LeVecke was behind the PAC Wake up Arizona! which was organized alongside Mac Magruder (owner of McDonalds franchises in Arizona) to fight the newly enacted employer sanctions laws.  LeVecke's group MJKL alone donated $9500 along with Wake Up Arizona's over $38k contribution to a PAC called Stop Illegal Hiring which was set up to help pass the proposed "Stop Illegal Hiring Act" or prop 202 back in 2008.  Its name is intended to confuse.  It was actually a law which would lessen the already enacted employer sanctions laws and required Arizona to wait until the Federal Government took action first against an employer before the state would be allowed to do anything.  Prop 202 failed at the ballot box.  Because Wake up Arizona is a 501 (c)6, they are not required to file campaign finance reports.

Wake Up Arizona was also a plaintiff in a lawsuit filed against the State of Arizona (Napolitano, Goddard and Garriott) in an effort to stop the employer sanctions law.  Other plaintiffs included:


2.  He also contributed to other PACs who would then fund Pearce's challenger, Kevin Gibbons (Jeff Flake's brother in law).  Sound like a familiar strategy?

LeVecke donated to the Mesa Deserves Better PAC  which exclusively donated for the purpose of "advocating defeat against Pearce".

Other political contributions which LeVecke made went to:

In June 2009, LeVecke attended an ImmigrationWorks USA Conference in Washington DC to speak about immigration.  In his speech he said,


They will tell you it is entirely appropriate for states and local government
to enforce national immigration laws. If it was intended that states enforce
national immigration laws then why is it states do not have the
right to issue visas, or allow more people in legally, or institute their own
guest worker programs? If we continue down this path of states and
local governments passing immigration laws and getting involved in enforcement,
we will have a patchwork of different laws across this country making it
impossible for multi state employers to manage.

"President Obama says it would be chaotic for states to create their own immigration policies...."


Is this what happens when they stop teaching the Constitution and Founding Fathers in school anymore?  People forget or warp what the founders intended?

If the "mother land" wasn't an important element to the founders, it is curious as to why they would include laws in our Constitution regarding the Territory or other Property belonging to the United States.

Article 4, Section 3
New States may be admitted by the Congress into this Union;....
The Congress shall have Power to dispose of and make all needful Rules and Regulations
respecting the Territory or other Property belonging to the United States;
and nothing in this Constitution shall be so construed as to Prejudice any Claims of the United States,
or of any particular State.

If "mother land" sovereignty wasn't what the founders cared about, why did they make sure to include the 2nd Amendment in the Bill of Rights which states,

A well regulated Militia, being necessary to the security of a free State,
the right of the people to keep and bear Arms, shall not be infringed.

If "mother land" and its resources were not important, why did the founders initially use the words
right to life, liberty and PROPERTY?

John Adams in defense of the Constitution in 1787 said,

The moment the idea is admitted into society that property is not
as sacred as the laws of God, and that there is not a force of law
and public justice to protect it, anarchy and tyranny commence.
If 'Thou shalt not covet' and 'Thou shalt not steal' were not
commandments of Heaven, they must be made inviolable precepts
in every society before it can be civilized or made free.﻿

The reason people emigrate to America is to obtain the personal freedom and economic opportunity that is offered.  The American Spirit has produced enormous changes for the better in civilization around the globe. No nation in history has been such a force for good.  If "here" becomes "there," ("US" becomes "Mexico" or "England" or "China") emigration is unnecessary. If we abdicate our US sovereignty to other nations or "international law", the "notion of our nation's values" will be lost.

Our government's primary purpose is to assure our freedom as individuals (individual sovereignty) and to protect us from those who would abuse or abolish it.
Patrick Henry, at the Constitutional Convention said,

Guard with jealous attention the public liberty. Suspect everyone who approaches that jewel. Unfortunately, nothing will preserve it but downright force.
Whenever you give up that force, you are inevitably ruined.

Our Founding Fathers did not fight to secure sovereignty for a country that would risk losing it through dangerous treaties or from encroaching foreign groups intent on breaking our nation's laws without consequence a mere two hundred years later.

As George Washington said to Alexander Hamilton, "If a foreign power can tell America 'what we shall do, and what we shall not do, we have Independence yet to seek, and have contended hitherto for very little."


Immigrants are among the most conservative, family value oriented,
freedom loving folks in our society. The great crime in my opinion
is they can't vote because if they could we'd have a even better country.


Attempting to vote in elections in other countries around the world of which one wasn't a citizen, probably wouldn't go over very well.  When did we begin interpreting the Constitution to define a "citizen" as anyone in the world who happens to "live" in the United States around election time?  Immigrants who have been naturalized have every right to vote in our nation's elections.  All other "immigrants" (legal or not), do not.


A share in the sovereignty of the state, which is exercised by the citizens at large,
in voting at elections is one of the most important rights of the subject,
and in a republic ought to stand foremost in the estimation of the law.

When you become entitled to exercise the right of voting for public officers, let it be impressed on your mind that God commands you to choose for rulers, 'just men who will rule in the fear of God.' The preservation of government depends on the faithful discharge of this duty; if the citizens neglect their duty and place unprincipled men in office, the government will soon be corrupted; laws will be made, not for the public good so much as for selfish or local purposes; corrupt or incompetent men will be appointed to execute the laws; the public revenues will be squandered on unworthy men; and the rights of the citizens will be violated or disregarded. If a republican government fails to secure public prosperity and happiness, it must be because the citizens neglect the divine commands, and elect bad men
to make and administer the laws.
Posted by SHIELD at 1:00 PM