Tucked in an Arizona Ready Council meeting in December 2012 was an interesting admission by Superintendent Huppenthal.


"Superintendent Huppenthal began the meeting with an update on Arizona graduation rates, which showed our gains ranking 3rd in the nation from 2006 to 2011 and our national rank improving from 46th to 27th overall.  In that 5 year period, Arizona students went from graduation at a rate of just under 70% to graduating at a rate of just under 78%."


Arizona didn't even BEGIN to implement the first phase transition to Common Core until the 2011-2012 school year. In fact, teachers are still being "trained" how to do "close reads" of paragraphs and "informational texts."

So, if we were showing noticeable improvement PRIOR to Common Core, why are people like Huppenthal claiming we still need to go with the unproven, untested, untried Common Core Standards today?

LD16 Primary Candidate Works For The Chamber Of Commerce.

So what else is new?

Legislative District 16 spent a great deal of time last year finding a good candidate who would replace the mess that Rich Crandall left behind. 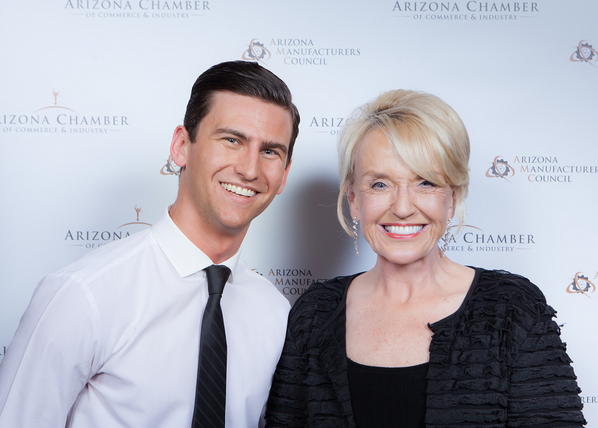 McArthur's bio is rather telling.

and of course our favorite: 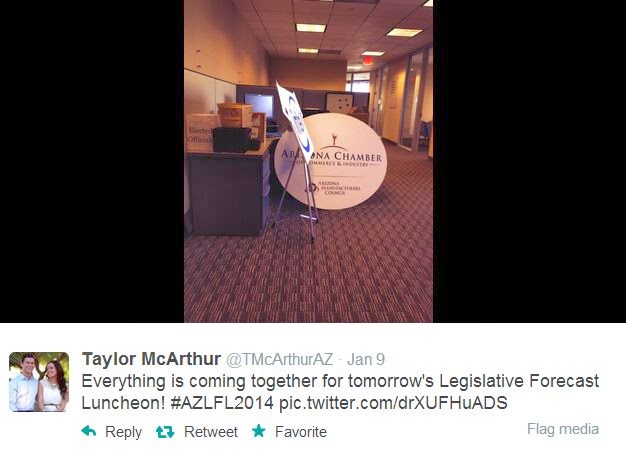 One of McArthur's first campaign propaganda hit pieces was to actually attack his challenger for drafting legislation which would protect a person's property rights!  These were bills which were created because Mr. Farnsworth listened to his constituents who approached him with their concerns.  Remember, Thomas Jefferson originally wrote in the Declaration of Independence that we have a right to "life, liberty, and PROPERTY."

Not a good start to a campaign, Mr. "Republican Conservative" McArthur.

Mr. McArthur patted himself on his back recently when he announced that he out-raised his opponent by 8-1 in his first finance report.

What he failed to point out?  Who his donors were including:

Steve Twist (lobbyist with the Chamber of Commerce) 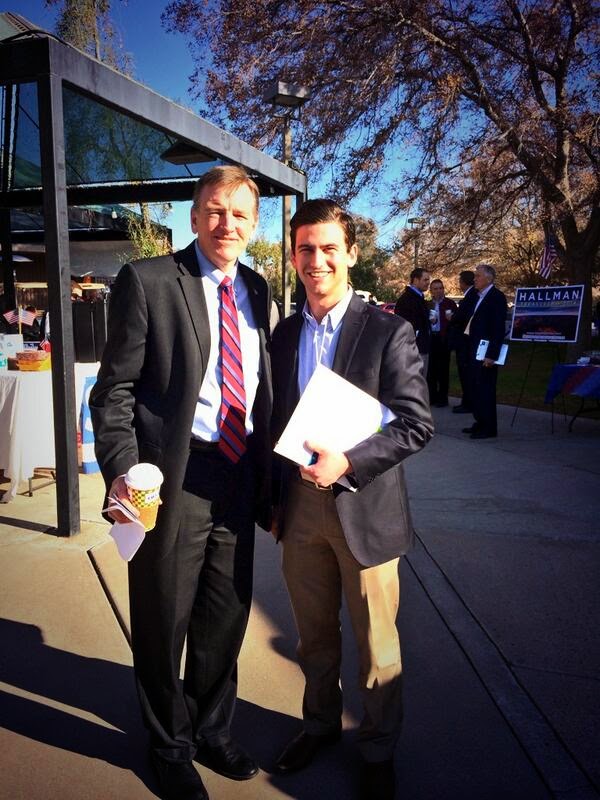 So, where does Mr. McArthur actually stand on the issues?

Let's look at his brief statement on education since that was Rich Crandall's pet issue.

I believe that education is truly an investment in our future. As a State Senator, I will promote quality education that prepares students for the workforce.


These are the same vague buzzwords used by proponents of Common Core.  "Quality Education" and "prepare for the workforce" were the excuses that led to the Federal Department of Education power grab to transform our educational system.

And who has been actively campaigning for Common Core?

The U.S. Chamber of Commerce.

The Chamber's push for Common Core falls right in line with their support for other cheap labor issues like amnesty. They often use the word "skills" when referring to the needs of area businesses.  That is exactly what Common Core does.  It teaches "skills" not "standards."  Driving a truck is a "skill."  Coding repetitive computer codes is a "skill."  What better way is there to suppress wages and saturate a labor market with low skilled workers than to dumb down the educational system and create more (un)educated cheap "skilled" labor. 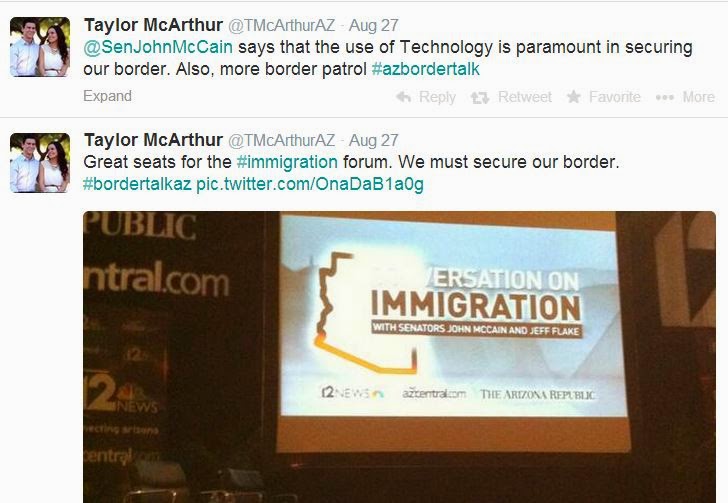 Proponents of Common Core including the Chamber of Commerce, have spent the last couple of years trying to coerce companies to endorse the new "higher" standards  skills.

The Arizona Chamber has worked closely with the Arizona Ready Council to help market Common Core.  Just last month, the U.S. Chamber held a Common Core Strategy Session meeting in Phoenix where attendees learned how to "tailor your messaging to make the biggest impact in your community." The Arizona Chamber has helped to coordinate a Common Core "toolkit" which is provided to companies to make it easier for them to promote the new "higher" skills.  This kit is complete with tag lines, talking points, pre-written letters to the editor, email samples for employees, media contact information, and an elevator speech.

The non-profit Achieve has also been working closely with the Chamber to coordinate efforts.  In fact, Craig Barrett, former CEO of Intel is the Chairman of Achieve and strangely enough, Barrett also chairs the Arizona Ready Council.

Recently, the Arizona Chamber was actively involved in defeating bills in the state legislature which would have brought back state and local control of education. Todd Sanders, president and CEO of the Greater Phoenix Chamber said, "We are going to need a world-class educational system to compete regionally and globally."

Glenn Hamer, president and CEO of the Arizona Chamber stated that his organization intended to make sure that none of the bills get to the Governor's desk.

We have serious reservations about a candidate who comes out of no where, is barely old enough to run for office, didn't bother to make the effort to be an elected PC, works for an organization that is actively working to create amnesty for illegals and ram Common Core down our throats, and will be nothing but a clone of Rich Crandall, Bob Worsley, John McComish, Michelle Reagan, Adam Driggs, and Steve Pierce.

Haven't we had enough?
Posted by SHIELD at 6:50 AM

Just thought we would point out that almost half of the $28,500 Bob Worsley raised since his shameful vote to expand Medicaid and Obamacare in Arizona came from the healthcare industry.

Not that we are really that surprised.  Some people's souls are cheap.

Wonder what kind of donors we will find on his next campaign finance report.

And by "Democrats" we mean the usual Republican posers. 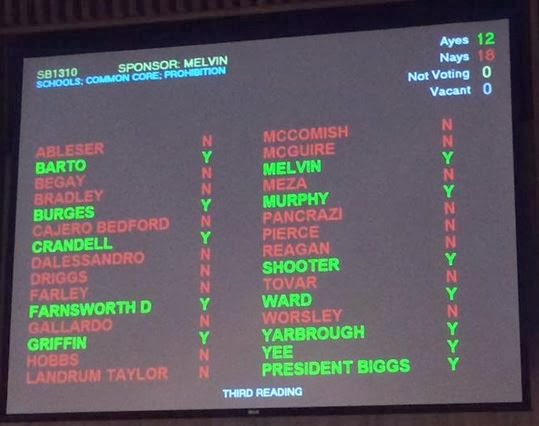 Sad to see that they voted to continue to abuse the young children of our state.  For what?  A few campaign dollars from Bill Gates and the Chamber of Commerce?

To thumb their noses at the Republicans in our state who tried to stop these posers from expanding Medicaid and the Obamacare debacle which will strap incomprehensible debt onto these same children?

Looks like you CAN buy anything in this world...with money.  Souls, egos, and all.

Six reasons why ACTUAL Conservatives are opposed to Common Core:

1.  There is nothing conservative about centralizing education around a set of common standards.

2.  Conservatives object to the process in which they were adopted which allowed for little to no public debate, cut out the legislative process, and was introduced via the backdoor which cut out "We the People."

3.  While perhaps the intent was not to have hyper-federal involvement, but the fact remains it does which violates the Constitution and Federal law.

4.  Conservatives typically don't approve of student privacy being violated by data mining which will be fostered through the assessment consortiums.

5.  They simply are not rigorous, they are mediocre and the embrace of Common Core represents a collective race to the middle.

6.  They are costly and states adopted the Common Core and entered into assessment consortium without having a handle on the costs.  Is this good fiscal discipline?


Perhaps these politicians should take a page out of their favorite Common Core Standards and do a "close read" of the Constitution.

And then the rest of us will work on voting them out of office....
Posted by SHIELD at 7:10 AM