Someone has recently announced their intentions to run for the 2nd Vice-Chair position
within the Arizona Republican Party Leadership.
SHIELD believes it is important to research and study those who
intend to run for any office representing the party prior to casting a vote.
The following quotes should give some insight as to
where this particular candidate stands.

As you read them, remember these words:


Rules for Radicals #5
"Ridicule is man’s most potent weapon. It is almost impossible to counteract ridicule. Also it infuriates the opposition, which then reacts to your advantage.” – Saul Alinsky
October 5, 2010
"The Tea Party did a great job throwing tea in the Boston Harbor in the 1700s, now in the 2000's they do a better job throwing Mexicans back in the Rio Grande. Sentiments similar to those expressed by some who call themselves tea party members prevailed to drive members of a disfavored group (members of the Church of Jesus Christ of Latter-Day Saints who were US citizens) from their homes in the dead of winter in Missouri under the auspices of the so-called extermination order signed by Governor Boggs. Simplistic solutions to complex problems often lead to decisions that fail to consider the long-term impact of those decisions."


November 23, 2010
"Your (sic) right, I dont (sic) give the average citizen enough credit. They dont (sic) know a US Senator from a State Senator. Political campaigns is what I do for a living. People dont (sic) care about let alone understand them. They go with what looks good and sounds good. I say focus on winning the Senate back because its (sic) not looking good for any GOP candidate to being occupying the oval office come next November. They are having to cater too far right to win the nomination and thereby leave those in the middle for Obama, in essence handing him another term."


December 6, 2010
"Simply stated, the vast majority of the TEA Party have no organic deliberation. And they allow the likes of Glenn Beck and Cleon Skousen to dictate their thought process. I can't put this next bit simply because the encroached messaging and positions of the TEA Party are synthetic with an abrasive tenor. The lack of harmony found in the rhetoric makes any discussions premised on logic and reason impractical. Therefore resulting in Conservative segregation on the basis of communication, not foundation."


Posted link to video mocking the TEA Party saying "Had to share this one":

February 10, 2011
Regarding thoughts of Pearce running against Jeff Flake for US Senate:
"Pearce is too far out on the right fringe. Plus he is too chicken to run against Flake."

"All these one issue (not even an issue if they did their own research and formulated their own ideas) voters. Life must be miserable for you. Immigration is an issue, but it is so far down the todampole (sic) of importance it makes me question some's (sic) knowledge of what problems our nation really faces."

"Can you name one viable piece of legislation that Sen. Pearce has sponsored that is not immigration related? Tying every issue to immigration is naive, ignorant and extreme. Case and point."


March 2011
Regarding attendance at the Lincoln Day Dinner/Fundraiser:
"I'd love to come but I refuse to attend any event that includes Russell Pearce."


April 12, 2011
"LIKED" a link to an Arizona Capitol Times article on Facebook titled, "Pearce recall campaign on track for signatures".

September 23, 2011
TWEET regarding supposed LDS Policy Statement by leaders of the church:
"Members can have their own opinions and not be in harmony w/LDS policy. I stand w/the church."

"Then why is the church against Pearce laws? Not judging but I'd question your understanding or application to the gospel."

"It's very clear where the church stands on immigration & its not w/Pearce & his law creations."

December 9, 2011
"I've not decided who I am going to support for the GOP POTUS nomination, but this is a good piece on Huntsman.
My rankings based on my input:
1. Johnson
2. Huntsman
3. Paul"

September 9, 2011
Regarding the LD22 resolution to support Russell Pearce:
"As a precinct committeeman of LD22, I’m very disappointed in this resolution. Although the recall efforts in LD18 have been orchestrated by Democrats, however wrong the motives may be, it is within the rights of the people of that district to petition for a recall of an elected official. It is not the business of another GOP district to collectively pick winners or losers amongst several Republican’s now seeking the same office. It is the duty of the GOP as a whole at each level to organization to combine resources and ensure a Republican victory when faced with opposition from another political party, not pit republican vs. republican. I can not support an effort that further divides a recovering party from fragmentation.."


He preached that the party leadership and surrounding districts had no business
getting involved and endorsing one Republican candidate over
another during the recall, yet, as an elected Precinct and State Committeeman
himself, he openly supported Jerry Lewis.
He also shamelessly used the LDS church in the process
to sway support towards Lewis.
See a video of election night that shows this State party Vice-Chair candidate
speaking to Mr. Lewis and his circle of friends prior to slinking away. (1:00)
Perhaps a qualifying question which needs to be asked
these days to those desiring to represent
the Republican Party should be,

"Will you ever support an Immigration Compact
in any form?"
Based on his own admissions as well as who he associates with,
I think it is clear what his answer would be.
Standing next to the candidate for 2nd Vice Chair and author of the above quotes,
Stephen Viramontes, is Dee Dee Blase who said,

"We have scheduled lectures that will be specifically aimed to members of the LDS community as well as the business community. We know that Mesa has a Mormon stronghold, and in order for us to have an overall effective campaign,
we must win over the Mormon community. It is imperative for them
to know that Russell Pearce (a member of the LDS community) refuses
to listen to the Mormon Prophet, and he refused to uphold the
Constitution of the United States." 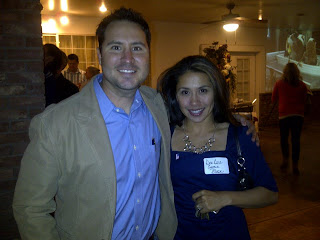 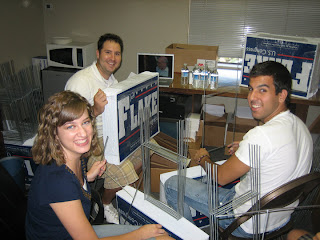 Every man who acts beyond the lien of private life, must expect to pass through two severe examinations.
First, as to his motives;
secondly, as to his conduct.
On the former of these depends his character for honesty;
on the latter for wisdom.
-Thomas Paine
Posted by SHIELD at 9:02 AM