"Everything in politics costs money."

Almost two years ago, the entire Republican Caucus agreed to support a Victory fund on the grounds that the funds raised would ONLY be used in General elections and NOT contested Republican Primary races.

-The Apollo Group  ($5k)
-Arizona Business Coalition ($30k) This group has donated to Kirk Adams and Rich Crandall in the past.  They are currently supporting Russ Jones who "struggled mightily" to vote for SB1070  while also sending mailers to "advocate the defeat" of  Conservative Republican, Lori Klein.  The contact name listed for the group is Glenn Hamer, President and CEO of the Arizona Chamber of Commerce.  The Arizona Chamber of Commerce was a plaintiff in a lawsuit filed against the state of Arizona over employer sanctions in 2007.
-Arizona Cattle Growers ($5k)  Steve Pierce is a member of the Cattle Growers
-Arizona Farm Bureau ($10k)  A Party in the same lawsuit mentioned above against Arizona over employer sanctions as well as an endorser of the "Arizona Compact".
-Arizona Cotton Growers ($10k) Appear to donate to more Democrats than Republicans
-Western Growers ($10k) A group of farmers and ranchers mostly in California
-Country First PAC ($500)  This is John McCain's PAC
-Republican State Leadership  ($50k)  This is a group that operates out of Washington DC


The common denominator for most of the groups listed above?  "cheap labor"

Makes one wonder what the real motivation and goal might be of the Victory Fund.

Between July 30th and August 22nd, the RVF spent an astounding $75,000 either "advocating the election of Rich Crandall" or "advocating defeat of John Fillmore" in the LD16 Republican Senate primary race.


Ultimately, this means that there will be $75,000 LESS in the Fund to advocate for the election of Republican Senators in the upcoming General Election, particularly in the more hotly contested districts.


To further prove that there is no such thing as a coincidence in politics, let's take a closer look at the connections between the Senate President Steve Pierce's personal campaign and the RVF.

1.  The Chairman of the RVF is Camilla Strongin.  Ms. Strongin is the principle in the firm The Engaging Company which has been paid more than $77,000 in this election cycle by the RVF.

The Engaging Company has also been paid $84,000 for campaign services in this election cycle by Steve Pierce's campaign.

2.  The Treasurer of the RVF is Hieu Tran.  Ms. Tran is also listed as the campaign Treasurer of Steve Pierce's campaign.  The previous Treasurer for the RVF was Tim Sifert who is a manager at The Engaging Company.


We're not done yet!


Another group listed on mailers along with the RVF supporting Rich Crandall is The Senate Majority Fund. 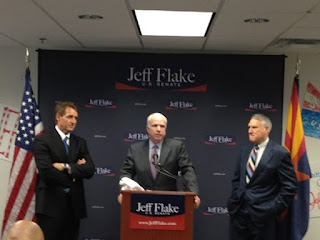 The FEC filings also indicate that the Treasurer for The Senate Majority Fund is Ashley Ragan.  Ashley Ragan's husband is John Ragan who is a manager at...you guessed it...The Engaging Company.

What is curious to us is why Senator Kyl's fund which FEC records indicate provides financial support for Federal candidates, is being used in a State Senate campaign.  More specifically, in a contested Republican Primary.
Nope.  Still not done yet.
Another Independent Expenditure group who has funded some of Rich Crandall's mailers is called the UA Friends for Arizona's Future.
On July 15, 2012, an article discussed the purpose of this fund.  It said:


Taking advantage of his final months in a leadership position in the Arizona Senate, Steve Pierce, of Prescott, has been visiting Tucson quite often these days collecting for his campaign and wooing donors for friends. Pierce, University of Arizona alumni, (sic) has won the favor of a new Independent Expenditure (IE) Committee called UA Friends for Arizona’s Future.
Senate president Pierce, who will most likely lose his leadership spot to Andy Biggs in the upcoming legislative session, is being viewed as a “litmus test in the next election” by the UA Friends” including Tucson’s heavy hitters Fred Boice and Don Diamond.
According to the Yellow Sheet, “The committee, which is chaired by former Arizona Board of Regents president Fred Boice, has raised $64,200 since it was formed in late February, and still had $59,200 cash on hand when the reporting period ended May 31. Camilla Strongin, the committee’s consultant, said the group intends to use the money to promote candidates who will support the UofA in the Legislature.”


The Treasurer, once again, is Hieu Tran and the political consulting firm listed on their financial statements is Camilla Strongin's The Engaging Company.  The Engaging Company has been paid $13,500 in consulting fees through August 15th as well as an additional $30,000 for mailers advocating the election of Rich Crandall.
In case you are mentally adding up the dollar amounts in your head, Rich Crandall has received over $105,000 from these two funds alone to help finance his primary election campaign.
It is not a coincidence that all of these funds (Pierce's re-election campaign, the RVF, The Senate Majority Fund and the UA Friends for Arizona's Future) are closely intertwined through The Engaging Company.
Yes, it does appear that everything in politics costs money.  The question is, what does that money buy exactly and what future votes are expected from Rich Crandall in exchange for pumping $105,000 into a
campaign for a position that pays $24,000/year?
(Not-so-coincidentally, Hieu Tran is also the Treasurer
on Bob Worsley's campaign)
﻿
Posted by SHIELD at 7:33 PM