If you were to do a search on the various groups who donated their time/money in the recall effort in LD18, essentially, supporting Jerry Lewis, you would come across a group called Campaign Money Watch.  Once again, this is a group funded by ANOTHER group called the Public Campaign Action Fund.  It's a neutral enough sounding title unless you were to actually look at their finance reports.  In them, you would see first of all, the group didn't file with the Secretary of State until October 18, 2011.  Their purpose was to "advocate defeat against Patriots for Pearce".  Also, you would see that a total of over $47,000 was spent solely on "communications/mailers".   CMW claimed they contributed to the recall effort because Senator Pearce was opposed to Clean Elections.

"PCAF’s Campaign Money Watch project spent over $47,000 on a direct mail campaign that delivered 80,000 pieces of mail to nearly 16,500 people who were likely to cast a vote today, the largest independent expenditure in the campaign. The pieces focused on Pearce’s corruption, ties to lobbyists, and opposition to Clean Elections."

They issued a threat to any other politician who dares to oppose Clean Elections.  "Russell Pearce’s loss should serve as a warning to elected officials throughout Arizona,” said Donnelly. “Opposition to Clean Elections and being in bed with special interest lobbyists could earn you an early retirement."

Here are samples of the mailers that Campaign Money Watch sent out.

As well as a webad. 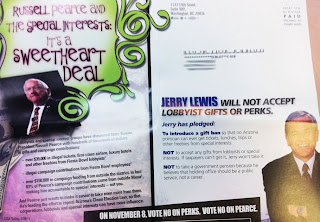 Notice the clever wording.  "VOTE NO ON PEARCE"
rather than "VOTE FOR JERRY LEWIS".

Remember when Lewis claimed this at the LD18 meeting?

How can someone running for office in a small legislative district, not KNOW who was mailing over $47,000 worth of mailers on your behalf?  They used a picture of him from the campaign!  Wouldn't you care enough to want to find out?  Especially if an unknown group were sending attacking mailers which were contrary to your campaign slogan of bringing a more "Civil tone to politics"?

Perhaps people should know who FUNDS the Public Campaign Action Fund.
On the list of groups who donate more than $20,000 per year:

The Chair of the National Governing Board for Common Cause is Robert Reich.  Reich is a former Secretary of Labor under President Clinton.

Jerry Lewis' campaign was quick to admit that they refunded the donation received from Michelle Steinberg, the Arizona Public Policy Director for Planned Parenthood.  However, they remained silent about the organization who spent over $47k on mailers on his behalf who FUNDS Planned Parenthood.
Posted by SHIELD at 10:00 PM