In 2009, Congressman Jeff Flake spoke to some Republican students at Arizona State University.  One of the subjects was about "Comprehensive Immigration Reform".  In particular, the STRIVE Act which he co sponsored with Luis Guttierrez (D-IL)


The Republican position on immigration, or at least the TONE,
has not been good for us politically.
Because the tone has been HARSH.
And when you look at the vast demographic out there,
Hispanic American in particular, you have a HARSH TONE,
even if your policy isn't any different than anyone elses,
it doesn't serve you well politically.

You can explain it both policy wise,
you have 12 million people who are here illegally now,
you've got to have a mechanism to deal with that.

Bring them out of the shadows.
You have to go about immigration
in a smart way and a HUMANE way.

Now, where have we heard words like "tone", "harsh", "out of the shadows" and "humane" before?


'Comprehensive' has gotten a bad word.
But until we have a better one I'll use that.

The article goes on to say that while Flake understands we need to enhance border security, that's not enough.

'You have to have a viable mechanism to deal with the people who are here. My party hasn't come to grips with that.' He explains that his own state of Arizona passed a controversial law (now the subject of a federal court challenge) that allows for us to 'more easily round people up. But that's not the problem. The problem is what to do about them after we get them.' On a political level, he says the 'tone and tenor of the debate' needs to improve on the Republican side. But the substance remains the nub of the problem. He says the problem is 'more complicated' than his party would like to admit.
But given the current politics, he says,
'I'd like to be optimistic [about reform legislation], but I'm not.'


In  2003, members of Arizona's delegation including John McCain, Jeff Flake and Jim Kolbe introduced a proposal to deal with the illegal immigration market-driving flow of immigrant workers.

Remember Kolbe?  He donated to the PAC Judgement Matters in 2008 along with Bill Konopnicki and Farrell Quinlan in an effort to defeat Senator Pearce by supporting Kevin Gibbons....Jeff Flake's immigration lawyer brother-in-law (who incidentally, has had his law license recently suspended).

At least Frank Sharry, executive director of the National Immigration Forum was impressed.  He admited that it would have been unthinkable in the late 1990s for three Republicans from a border state to make such sweeping proposals.

Sharry's reaction?
This is HUGE!

Not just ANY election year but one which Flake is now running for the Senate.

Then cue the tack to the right.

"In the past I have supported a broad approach to immigration reform - increased border security coupled with a temporary worker program.
I no longer do," Flake says in an immigration-policy statement that was
expected to be posted on his campaign website as early as today.
"I've been down that road, and it is a dead end.
The political realities in Washington are such that a
comprehensive solution is not possible, or even
desirable given the current leadership. Border security must be addressed
before other reforms are tackled....For those who say that this is a late conversion, I've been supporting these border-security things all along."

Even the Vice President for immigration policy and advocacy at the CENTER FOR AMERICAN PROGRESS said,

It's kind of hard for him to walk away from this when he has his fingerprints all over the issue...It's not like he just gently engaged it - he was a full-throttle supporter of comprehensive reform. So it's hard for him to erase what in fact has been written in Sharpie pen.


If only Flake's sudden change of heart were believable.  The reality is, however, that his Comprehensive Immigration Reform platform has trailed as a close second, right behind earmarks, throughout his political career.

He said as much himself.

For those who don't agree with my position,
or think that it ought to be something different,
at least I think they give me a little credit for
STICKING WITH MY POSITION.

He is betting on the hope that the electorate will have short term memories.  He will continue to insult our intelligence by downplaying his former role when he pushed for Comprehensive Immigration bills alongside the likes of Luis Gutierrez.

Then again, he was FOR self-term limits before he was against it. 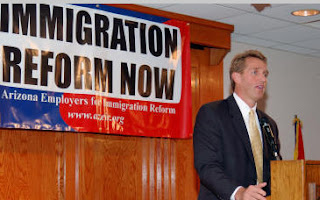