Jeff Flake: Fool Me Once, Shame On You...

Fool me twice, shame on me.


Jeff Flake gave us lip service when he first ran for Congress claiming he would term limit himself to three terms.


Now, Jeff Flake, who has spent the last decade leading the charge to pass comprehensive immigration reform (CIR) while in the House, claims to have SUDDENLY had a change of heart about CIR, now that he is running for the Senate.

Only this time, we aren't buying it.

We've covered Flake's flaky-ness on this issue before.  You have to suspect SOMETHING isn't quite right when Angela Maria Kelley, vice president for immigration policy and advocacy at the Center for American Progress, says this about Flake's recent 180 degree turnaround:

It's kind of hard for him to walk away from this when he has his fingerprints all over the issue.  It's not like he just gently engaged it - he was a full-throttle supporter of comprehensive reform. So it's hard for him to erase what in fact has been written in Sharpie pen.

Turns out, Ms. Kelley was right.  Flake was even more involved in CIR than we could have ever imagined.  She should know.  Prior to joining the Center for American Progress in 2009 (whose major funders include George Soros and Peter Lewis), Kelley was a director at the National Immigration Forum where she "headed its legislative, policy, and communications activities" and was "a frontline negotiator as Congress debated proposed comprehensive immigration reform legislation." 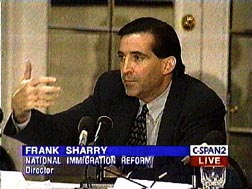 Another former Executive at the National Immigration Forum is Frank Sharry.  We've discussed Sharry several times before, and we will mention him again later.

The current Executive Director of the NIF is Ali Noorani.  After the Russell Pearce recall election, Noorani tweeted on December 11th,

(Who would have thought that Ali Noorani from the NIF would link to an article that discussed how Lewis used the LDS church and endorsed a Utah-style Compact?)
It's clear that with all of the various CIR bills that Flake was involved with over the years, he would have had the opportunity to work closely with Ms. Kelley.  We know at the very least, Flake was in the same room as Frank Sharry in 2003 when he, McCain and Kolbe all gave a press conference to introduce one of their CIR bills.  Sharry said, "This is huge!"  to have a Senator and two Representatives from Arizona, no less, behind a CIR bill.  Kelley was so instrumental in the immigration operation that Sharry referred to her as "The General".

Another close associate and policy director of Jeff Flake was his own Chief of Staff, Margaret Klessig.  Klessig played an important roll on an Immigration Task Force Committee as did her boss, Jeff Flake, along with Senator McCain, Leon Panetta, the late Ted Kennedy, Janet Murguia from La Raza, Tamar Jacoby and Frank Sharry in 2006.  This committee was organized by the Migration Policy Institute and funded through donations made by a slew of leftist slush funds such as the Open Society Institute, the Carnegie Corporation, JM Kaplan Fund and the Ford Foundation. Klessig has since joined a group called ImmigrationWorks USA as their Chief of Staff.  The founder of Immigration Works USA is Tamar Jacoby.  It was Flake who said that Tamar had "put out some really good work with regards to immigration reform."

See how connected they all are?

Now that you know who the players are, let's look at what else they have been up to over the years.

In 2003, prior to Flake, McCain and Kolbe pushing their immigration bill, a documentary fluff piece was put together titled, "Kids Across the Hill" featuring many of those who worked diligently behind the scenes.

Those interviewed for the film included
1. Margaret Klessig
2. Jeff Flake
3. Angela Kelley
4. Becky Tallent (aide to both McCain and Kolbe)
5. Frank Sharry
6. Luis Gutierrez (Flake's co-sponsor of the STRIVE Act)
7. Alfredo Gutierrez (co-chair of the Arizona Boycott Committee and founder of lafronteratimes.com.  He called on businesses to cancel their meetings and conventions in Arizona until SB1070 was repealed)
8. Tamar Jacoby
9. Eliseo Medina (SIEU)
10. Cecelia Munoz, one of Obama's Czars who has ties to La Raza, Campaign For Community Change (The action arm for Center For Community Change and who funded PAZ to canvass for Jerry Lewis during the recall.  They also supplied the sign at the Supreme Court protest above), Occupy, Moveon and ACORN

Young 20-something staffers for Republican Arizona Congressmen Jeff Flake and Jim Kolbe race Senator Ted Kennedy and his Immigration Counsel Esther Olavarria to introduce a strong, bipartisan bill to Congress.
Will Kennedy's staff rally the unions, advocates and business community in time to draft a bill? Will Kolbe and Flake find a Democrat to sign on first?


Who were the partners and supporters for the documentary?  We mentioned a few of them earlier.  They include:

Open Society.  This is just one of the many grant making organizations for George Soros.  The link to soros.org on the documentary's website is currently "under construction".  Also, Cecilia Munoz, one of Obama's czars who we mentioned earlier, was a member of the board for the Open Society.
**UPDATE** The Blaze.com recently reported on the Soros funded Open Society.

Unbound Philanthropy.  The philosophy of the Unbound Philanthropy grants is "we envision a world where they (migrants) are engaged in their new communities with respect, compassion, fairness, and justice."  One of the board members is a former member of the Migration Institute who sponsored the Immigration Policy Conference which Jeff Flake was not only a member of their Immigration Task Force, but was also a guest speaker in 2005.

The Ford Foundation.  Offers grants to countless leftist causes.  Since 2010, donations were made to: 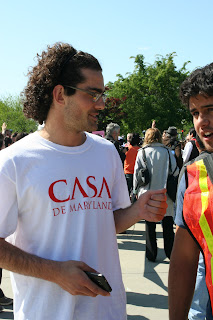 
Why would Jeff Flake be so willing to participate in a task force and project that not only involved radical immigration reform advocates, but was supported and funded by both George Soros and the Ford Foundation who have spent billions funding radical leftist organizations?


It's not like he just gently engaged it - he was a full-throttle supporter of comprehensive reform. So it's hard for him to erase what in fact has been written in Sharpie pen.

We'll explore Flake's own words that are written in a big, black Sharpie pen over the last decade and the suspected motivation behind it... next.
Posted by SHIELD at 2:00 AM