Hypocrisy. How Do I Love Thee? Let Me Count The Ways.


Half the truth is often a great lie.


#1
For someone who criticizes his opponent every chance he gets for being a lobbyist, Kirk Adams seems to readily surround HIMSELF with plenty of them.  There are at least seven members of his own Campaign Finance Committee who are currently registered as lobbyists in Arizona.  People like

We hope they don't have plans to ever run for political office.  Or, at least not against Mr. Adams.

According to Kirk Adams' legislature bio, he was Chairman of the Arizona Leadership Council for the lobbying organization called the National Federation of Independent Business.  Yes, he was a lobbyist himself.

His bio also states that he served as the small business representative on the Governor’s Task Force for the Health Care System from 2002-2004.  This might explain all of the lobbyist and health care special interest group donations he received for his legislative campaigns.  Unfortunately for Mr. Adams, the Arizona Hospital and Healthcare Association has chosen this time to enthusiastically endorse his opponent, Matt Salmon.

In a University of Phoenix  article from October 2011 it says,

Adams, who studied business administration at the University, began to interact with the government in his advocacy role, occasionally meeting with the Arizona State Legislature and testifying on bills that would affect small businesses. “I quickly realized that I knew a lot more about small business than most of the legislature.”

#3﻿
A couple of weeks ago, Jon Kyl organized a fundraiser for Kirk Adams at the #3 location in Washington DC for lobbyists with special guest, John "I-don't-know-if-he-supports-me-or-not" McCain. 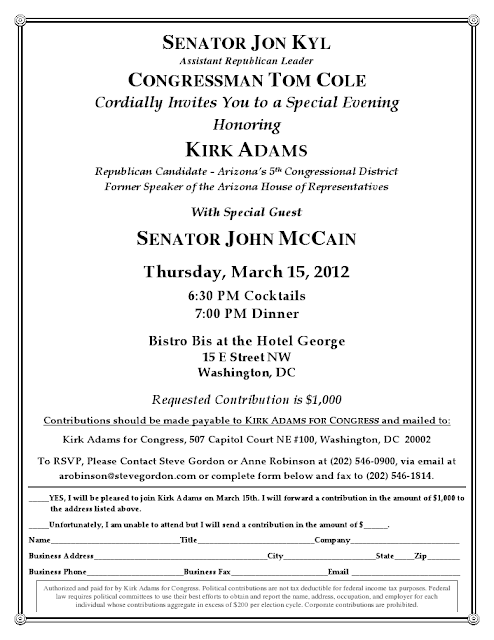 What's even MORE interesting about this event is the letter that accompanied the invitation. 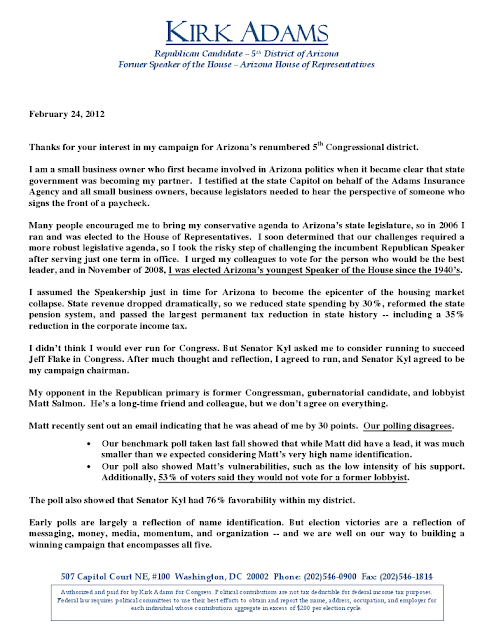 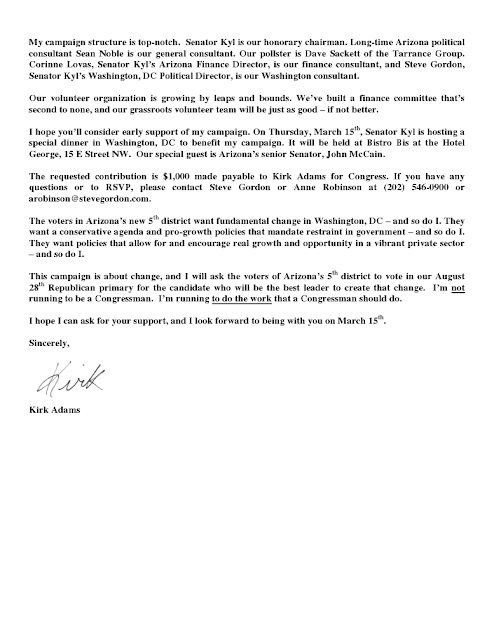 - 53% of voters polled said they wouldn't vote for a former lobbyist?  So, why would they vote for Adams?

- 76% had a favorable opinion of Senator Kyl?  The same Senator Kyl who was a lobbyist with Jennings Strouss prior to his political career?

#4
As if the last fundraiser wasn't duplicitous enough, Mr. Adams is holding yet ANOTHER fundraiser this Friday, March 30th, sponsored by Veridus.  A LOBBYING GROUP.  Who works for Veridus?  Wendy Briggs, one of Kirk Adams' Finance Committee members.  Ms. Briggs isn't just ANY lobbyist...she is Arizona's top female lobbyist! 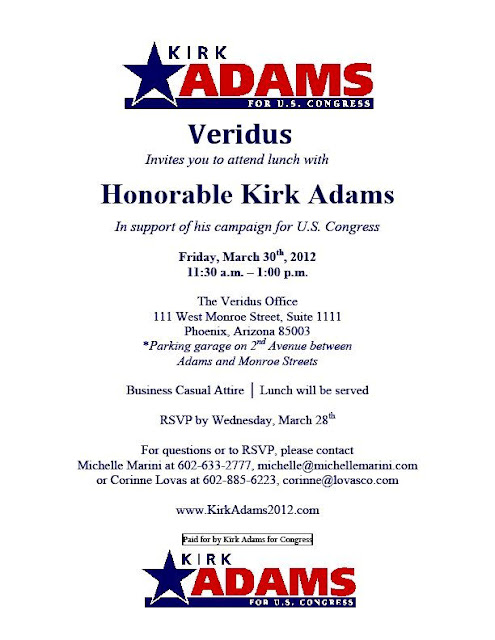 Since Mr. Adams seems to be SO averse to lobbyists, we would like to inform him of his options.

1.  He can stop recruiting them to be a part of his campaign.

2.  He can stop holding fundraisers with them.

3.  He can give back the 20% plus in donations they have made to his campaign.

4.  He can stop being a hypocrite.

At some point, one would have to ask themselves, if Mr. Adams is so quick to have us believe that his words have merit while his actions and associations tell a different story,
what will he be like if thrown in with the sharks in Washington DC?

Does he have so little to stand on that he has to resort to these kinds of deflection tactics?

A hypocrite is the kind of politician who would
cut down a redwood tree,
then mount the stump and make a speech for conservation.