Could This Be The Common Core Out For Districts?

The National School Board Association who represents over 14,500 districts in the country, sent a letter to Arne Duncan in May 2011 to address their concerns over proposed changes to the Family Education Rights and Privacy (FERPA) law. 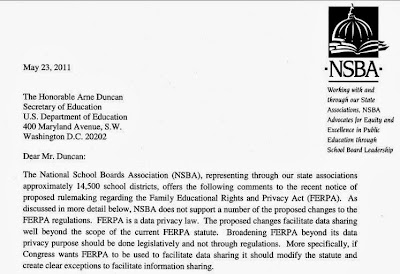 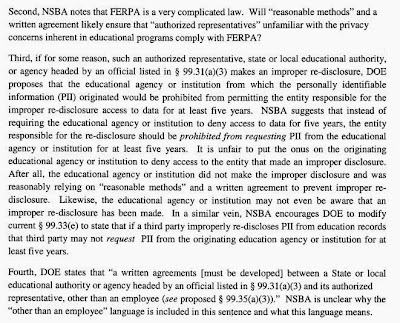 By December 2011, the Department of Education and Arne Duncan made the changes. 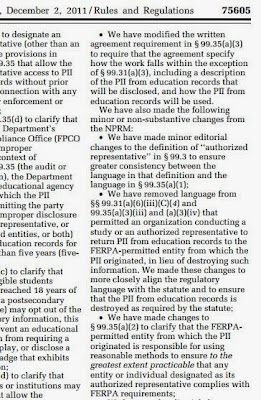 States were required to sign a Memorandum of Understanding (MOU) by mid-2010 and agree to four reforms before they could receive any money from the Race to the Top grant.  One of these reforms included establishing a longitudinal data base.  It was probably assumed that student data would be secure and protected by FERPA.

The DOE then did a bait-and-switch by modifying the FERPA laws to give the government the ability to access and use our children's Personally Identifiable Information (PII) without parental consent and share or sell it to other "authorized representatives" for "educational purposes."

This sounds like a breach of contract and the perfect "out" for local Districts or States.

Some Districts have already started the ball rolling....

The school boards of Rye Neck, Pleasantville, Pelham and Pocantico Hills voted this week to drop out of New York’s participation in the Race to the Top program, hoping they will be able to withhold at least some data from the state. Districts considering doing the same include Dobbs Ferry, Hastings-on-Hudson and South Orangetown.

**UPDATED**  Another NY district has pulled out.
Spackenkill School District
Posted by SHIELD at 7:05 PM