Some of our elected leaders have received some very generous "gifts" over the last few years from the very groups who have been shoving the CCSS mess down our throats.  These generous donors have been involved with writing the standards, coordinating for common testing and establishing a data collection system.  They also provide scholarship programs for low income and disadvantaged students and everything else in between.

For example, here is Rich Crandall's 2010 financial disclosure statement where he received over $2000: 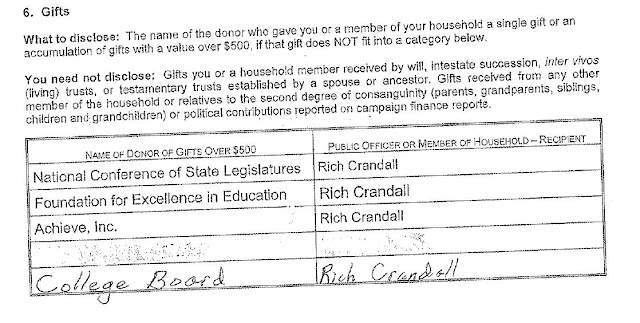 Who are these donors?

National Conference of State Legislatures is the group allowing themselves to be used in an effort to make Common Core appear to be "state-led."  Our own Rep. Doris Goodale is also a member of the NCSL and who sponsored HB2047 to replace the AIMS testing with PARCC. When that bill failed, Rich Crandall was prepared to come up from behind and pick up the slack with his Crandall Amendment in HB2425.

Achieve, Inc was the organization tasked with writing the Common Core State Standards.  In fact, the Chairman of the Board is Dr. Craig Barrett, former CEO of Intel who Governor Brewer tapped to head her Arizona Ready Council in Arizona to push for the implementation of the CCSS.   Achieve's biggest donor is the Bill and Melinda Gates Foundation along with other leftist donors such as the Hewlett Foundation, Lumina Foundation, and Carnegie Corporation, just to name a few.

College Board facilitates the common college entrance exams and focuses on aide to low income and disadvantaged students.  College Board is also pushing for the CCSS to go along with their "common" college exams and receive hefty donations from the Bill and Melinda Gates Foundation.

(2) Lumina Foundation who donates to groups such as the Center for American Progress, Brookings Institute and Aspen Institute.

(4)  West Ed whose Board of Directors include John Huppenthal and several Arizona School Superintendents.  Their funding comes from groups such as the Bill and Melinda Gates Foundation, Carnegie Foundation, and the Hewlett Foundation (who donates to the Soros' Tides Foundation and the United Nations).


(6) Education Commission of the States.  Rep. Doris Goodale is a member of the ECS Committee and receives funding from many of the same organizations listed above.

(7)  Data Quality Campaign  who has been organizing the data collection for CCSS and assessments.  Major funding comes from the Bill and Melinda Gates Foundation.

(9)  Foundation for Excellence in Education  (see above) 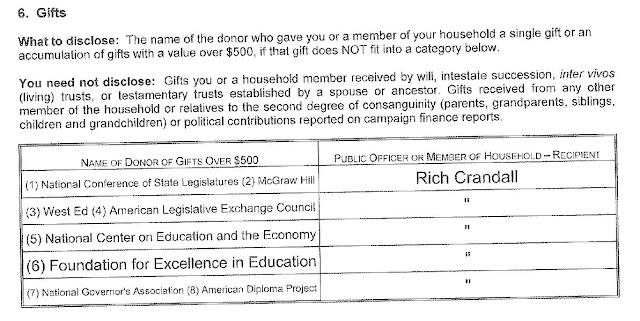 ﻿
Same groups as 2011 plus McGraw Hill, another company ready to implement CCSS.


How incredibly convenient that after the mess regarding the Republican Victory Fund, Crandall decides to quit.  Right after he helps push through the final important pieces of legislation to fully implement the  state-led  United Nations led CCSS.


Who else received "gifts"? 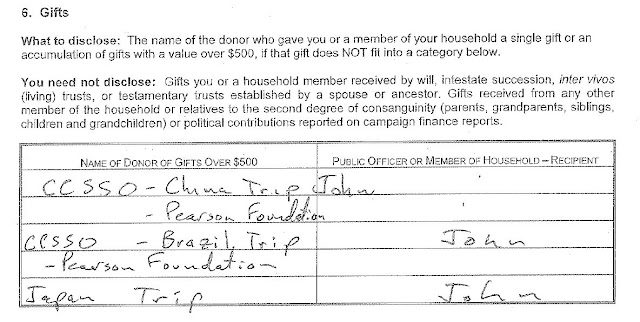 Representative Doris Goodale in 2011 from Jeb Bush's Foundation for Excellence in Education. 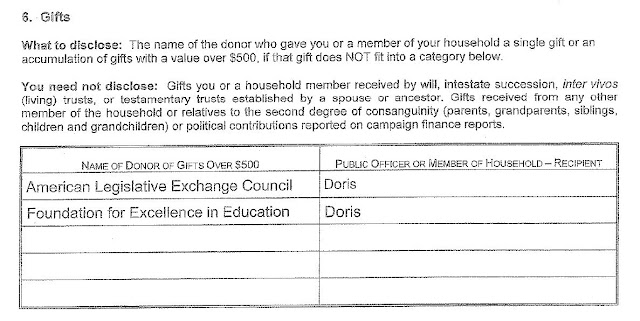 Speaker of the House Kirk Adams in 2010 who attended meetings paid for by the Lumina Foundation and that Aspen-Rodel Fellowship.  Aspen's goals are to

Representative Steve Court in 2010 received gifts from the NCSL and the Foundation for Excellence in Education.

Representative Heather Carter attended a meeting in 2011 for the Data Quality Campaign.

Senator Linda Gray who attended a bunch of education conferences in 2011 for the NCSL, Education Commission of the States, and the Casey Foundation who donates to the NCEE and other groups supporting the CCSS.

Crandall, Goodale, Yee, Carter, Gray and Court were all members of the legislature's Education Committee at the time of the "gifts." Huppenthal, of course, had just been elected as the new State Superintendent.  Our Governor and Superintendent Horne had just signed the Memo of Understanding (MOU) to implement the CCSS in June 2010.  It would appear that our legislators were being schmoozed into supporting the necessary legislation in order to fully implement not only the CCSS but the important PARCC exams and data collection as well.

Feeling a little taken advantage of yet?
Posted by SHIELD at 9:03 PM