Robert Graham And Prop 121: The Good, The Bad, And The Ugly

We watched the debate on Tuesday night between Robert Graham and Doug Little, two candidates who want to lead the Arizona Republican Party.

In the debate, Mr. Graham stated about the No on Prop 121 campaign, "I raised the money.  I was very instrumental in putting together the message, the targeting."

Bill Montgomery, the front man for "No on Prop 121" said back in July,"the other person involved in marshaling opposition to the initiative is former GOP Congressman John Shadegg."


THE BAD:  Was it a poor use of resources and funds?

Regardless of who wants to   gets to take credit, it was pretty clear that Prop 121 was headed for defeat almost from the beginning.  Prop 121 was unpopular amongst not just Republicans but also Democrats, Libertarians and even members of the Green Party.


They don’t agree on much, but a plan to create “top two” primaries has Arizona’s major and minor political parties on the same page – or at least close to it.  Their responses range from outright opposition from Republican, Libertarian and Green leaders to noncommittal dislike from the Arizona Democratic Party.

The state Democratic Party hasn’t taken an official stand on the measure, but Executive Director Luis Heredia said there is little support for it.
Leaders of Arizona’s Libertarian and Green parties argue that the initiative would make it virtually impossible for their candidates to make it onto the general election ballot.
“There is a reason we have partisan primaries in Arizona,” said Angel Torres, co-chair of Arizona’s Green Party and a candidate for state House in a Phoenix-area district.


The day after this article was posted, Mr. Graham put out a youtube video opposing Prop 121.  The credit at the end of the video states it was paid for by "GrahamforArizona" and encourages viewers to visit the Saveourvote.org website.

Another "thank you to the grassroots" video published on November 15th also showed "paid for by GrahamforArizona."  Was Graham's personal $5800 donation to Save Our Vote on August 17th used to create these videos with the intent of using them later as campaign material?  Graham conveniently announced his run for Chairman about 10 days prior to the release of the first video.  Graham responded to a question at the recent debate saying that the only money he spent on his State Party Chairman campaign was his own $4500 to cover the cost of t-shirts, buttons and signs.

Arizona State Senate, Dist. 5, candidates Republican Kelli Ward and Democrat Beth Weisser ...agreed again in opposition to Prop 121 citing reasons that everyone should have a voice, no matter the popularity of their political party affiliation.


During this same time, an article in the Tucson Sentinel said,

An obscure political group based in the Valley injected another $350,000 this week into the effort to defeat Proposition 121...

In all, Americans for Responsible Leadership has donated $450,000 to Save Our Vote, accounting for nearly all of the latter's fundraising reported to the Arizona Secretary of State's Office.

Americans for Responsible Leadership also contributed $500,000 in mid-September to No New Taxes, No on 204...That contribution accounts for nearly all of that group's funding listed with the state.


In the recent debate, Mr. Graham stated that "he" raised the money for Prop 121 between September and November.  According to the article above, by mid-October, $450,000 had been donated to Save Our Vote by the Americans for Responsible Leadership which lists Graham as a Director since July 2011.

Also, the article tells us that at least $100,000 to oppose Prop 121 and another $500,000 in opposition to Prop 204 had been received within the first 2 weeks of September.  This leads us to assume that Mr. Graham was able to somehow raise at least $600,000 in just two weeks time while also running his own company AND attending vigorous weekend-long MBA classes every other weekend at the Thunderbird School of Global Management.

It becomes even more unbelieveable   impressive when we are told that he personally was able to raise $1M to oppose two propositions in less than a month while doing all of the things listed above PLUS attend a required Thunderbird study abroad in India during mid-October.  An amazing feat from someone who didn't raise a dime in the five months he ran for Governor.

He must have found some new connections friends with deep pockets...


And finally just before the election, there was STILL very little support:

Both major parties are opposed to the initiative, as are third parties...Only 37% of Arizona voters said they would vote in favor of open primaries in the latest Rasmussen survey.

Let's look a little closer at the donations from the Americans for Responsible Leadership PAC to the Save Our Vote campaign.

The first thing we noticed was that the treasurer is our familiar friend, Hieu Tran, from the Republican Victory Fund/Republican House Victory fiasco as well as other endeavors such as Steve Chucri and Bob Worsley's campaigns.

We also discovered that less than $8000 of the $575,000 received came from individual donors.  The rest came from the Americans for Responsible Leadership PAC.


Now let's take a look to see where the money was spent:

$70,000 to Americans for Responsible Leadership for mailers


Reasonable expenses.  Here's where it gets less "grass-rooty":


$18,000 for sign installation (the signs cost more to install than they did to make? Couldn't this have been a grassroots, ground game effort instead of paying one guy to install signs?)

$40,000 to Jess Yescalis for consulting (Yescalis owns a fundraising firm that is connected to Sean Noble's Center to Protect Patient Rights who was involved in the money "laundering" accusation in California.  Noble was John Shadegg's former Chief of Staff.  Remember, it was Shadegg who Bill Montgomery cited in July as the other person involved in "marshaling opposition.")

$208,000  to Larry John Wright for "advertising." Mr. Wright has been busy over the last year producing videos for other candidates such as Bob Worsley and Jerry Lewis.   We were only able to locate one TV commercial created for Save Our Vote.

The Chairman of Save Our Vote is Tony Bradley who formed a consulting company in 2009 called Roundtable Strategies.  Mr. Bradley's company was paid by the Save Our Vote campaign for communications and mailers.  Bradley consulted on previous campaigns for Paul Gosar, Amanda Reeve (LD 28 House candidate who was one of the few candidates directly supported by the ARL PAC...and lost) and Phoenix City Councilman Bill Gates.


One of the debate questions asked on Tuesday night was, "Will you take a pledge that you will not pay a penny to a political consultant that is not a paid full-time employee of the Arizona State Republican party?"

Graham responded by saying, "We want to be frugal.  We want to be smart.  We want our dollars to stretch as far as we can.  Now remember, we're part of the Republican party, right?  We're supposed to do that.  When it comes to consultants, it's interesting to be asked to make a pledge like this because in my organization I PERSONALLY have gone to consultants and asked for help on how to be better with organizational skills...so to pledge that you won't use consultants is like a pledge that you won't get expertise (sic) advice at some time.  I'm not saying that we're going to go line the pockets of people...so I'm not going to take the pledge."

Doug Little responded by saying he feels the political consultant community in Arizona is toxic for our party and was willing to take the pledge.

How capable IS Mr. Graham if he admits to relying on expensive political consultants for advice on how to do the job that many grassroots people already know how to do? 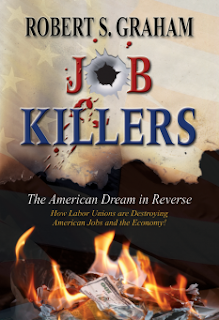 Other races which the ARL donated directly to included, ironically, $11,500 in the primary election to help union-supported Andy Tobin defeat Lori Klein.  Another $21,000 to help Amanda Reeve and Kate McGee and a measly $800 to "help" Frank Antenori.

On August 15th, the ARL donated $7500 to the Republican Victory Fund.  Between August 16th and the primary election, the RVF spent over $40,000 to support Rich Crandall over John Fillmore.  Almost 1/4 of the money used during that time period came from Robert Graham's Americans for "Responsible Leadership" PAC.

Did we mention that in the debate, Mr. Graham claimed he would never endorse one Republican candidate over another in a primary election?  Did he bother to ask where the money would be spent before he sent in the donation?  Or did he know?
Finally, there was a $5,300 head-scratching donation by the ARL that went to support Senator Orrin Hatch, R-Utah during the primary race when he ran against TEA Party backed candidate, Dan Liljenquist.

While Mr. Graham refused to answer the debate question regarding which slate he supported during the Maricopa County Republican Committee race two weeks ago, it would appear that he did manage to set up a table at the County meeting to advertise his book  candidacy. 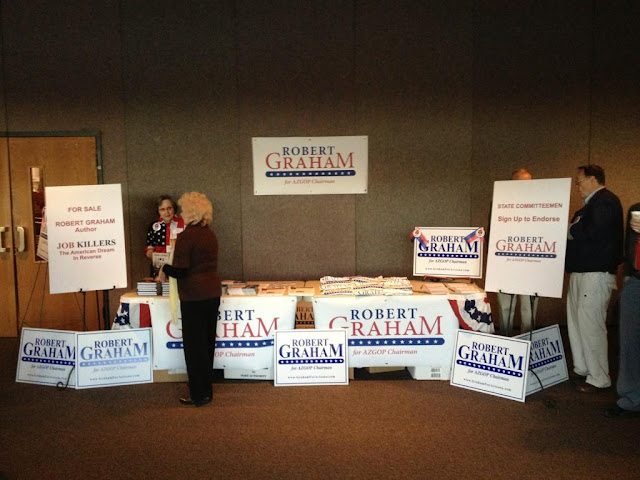 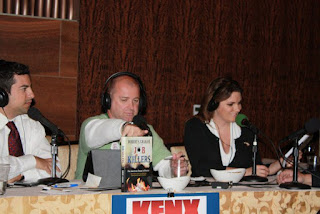 On a completely different topic, it would appear that Mr. Graham has ventured into the "green" demolition business by creating a new company called Green Steel along with his ARL PAC buddy, Eric Wnuck.  They quickly came across their first project this last fall in New Hampshire of all places to "recycle" an old paper mill which they purchased, sight unseen.  We wonder if they both know the former New Hampshire GOP Executive Director, Stephen DeMaura who is the current director of Americans for Job Security.... because that would be a very small world!
Posted by SHIELD at 11:04 PM